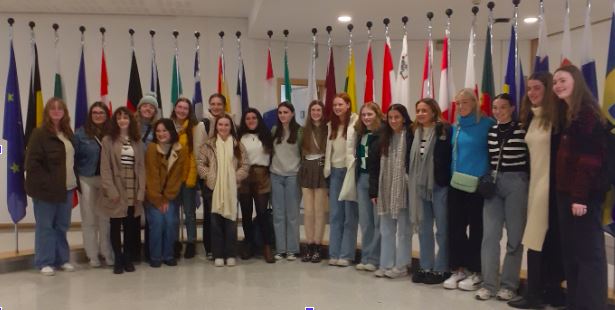 Politics and Society Trip to EU Parliament in Brussels

5th and 6th Politics and Society students enjoyed a busy two days in Brussels on December 5th and 6th with a packed schedule. After an early morning start, they arrived in a chilly Brussels and spent the first days enjoying all the city has to offer at this time of year including a walking tour with chocolate tasting, shopping and enjoying Plaisir d’Hiver (Brussels’ world famous Christmas Market) and a spectacular lights and sound show in the city central Grand Place. Day 2 was spent in the European Quarter where students had the opportunity to visit the Parlamentarium, an interactive museum on the history of the European Union. From there, it was off to visit the European Parliament where Luke ‘Ming’ Flanagan welcomed the students and spoke about the work of the parliament. After visiting the EU Parliament itself and seeing at first hand how it works, it was back to Roscommon, tired but happy! A wonderful trip and an opportunity to see politics at work first hand. The students were accompanied by their teachers Ms Claire Burke and Ms. Letitia Mulleague. Huge thanks to Ms Burke for organsing the trip.

Hard luck to our Senior Volleyball team and their coach Ms Rebecca McHugh who narrowly missed out on All-Ireland glory after battling it out against Kilkenny City Vocational School in the Senior C secondary school final held in the National Sports Campus Blanchardstown on last Wednesday 14th December. The girls were pipped to the post in a nail biting final set but unfortunately it was not to be for us on this occasion. Well done to Kilkenny City Vocational School and congratulations to all of our girls for your hard work, dedication, team spirit and sporting talent on the court. You have done the school proud!

We had the pleasure of welcoming back ‘Caith Amach É’ on Dec 14th for what has become their annual performance here in the Convent. Bunaíodh an grúpa seo i 2011 chun tacaíocht agus cabhair a thabhairt do dhaltaí na h-Ardteiste leis an tSraith Pictiúr sa Scrúdú Béil. Niall and Briain were energetic and highly entertaining as they performed their smash hit comedy show to the delight of our Leaving Cert students.The show is interactive and inventive and uses many theatrical skills to great effect. Afterwards, students had the opportunity to take part in a language workshop with the emphasis on oral skills and communication. Spreagtar na daltaí chun cainte i slí nádúrtha a chothaíonn muinín agus misneach. Tráthnóna an-shiamsiúil a bhí againn gan trácht ar an gcabhair don Scrúdú Béil. Go raibh maith agaibh Niall agus Briain.

Congratulations to Muireann O’Brien (Class of 2022), who received the prestigious Pauline and Bunnie Jones Scholarship at an Excellence Awards Ceremony held in University of Galway on November 21st last. The Pauline & Bunnie Jones Scholarship Programme was established by the philanthropic Jones family of Tulsk, in honour of their parents Pauline and Bunnie Jones. Valued at €10,000 per student, the scholarship supports students from schools in County Roscommon who demonstrate academic achievement in their Leaving Certificate and wish to register for a full-time undergraduate programme at National University of Ireland Galway (NUI Galway). Muireann, daughter of Cathal and Ruth O’Brien Cleaboy Ballintubber, achieved 625 points in her Leaving Certificate and is studying Speech and Language Therapy.

Congratulations to Lauren Mc Tiernan in sixth year who is a Regional Winner in the 18 years + age category of the National Credit Union Art Competition 2022. The theme of the competition for this year is ‘It’s a beautiful world’. Lauren’s entry will now progress to the National Final for adjudication. The National Final takes place late December. A virtual final, announcing the national winners in each category, will take place, late January, once a date has been confirmed.

Staff and students got into the Christmas spirit last Thursday and hosted a Christmas Jumper Day in aid of Focus Ireland, raising much needed funds for this homeless charity. Focus Ireland was set up in 1985 by Sr Stan Kennedy and provides services for people who are homeless and people at risk of homelessness in Ireland. Thanks to everyone for your generosity and a special word of thanks to 3A and their teacher Ms Mulleague who organised the day.

Congratulations to second year student Emily O’Gara who was placed in the first three of the First and Second Year Flash Fiction and Poetry Competition in the Allingham Arts Festival’s Secondary School’s Competition. Well done Emily!